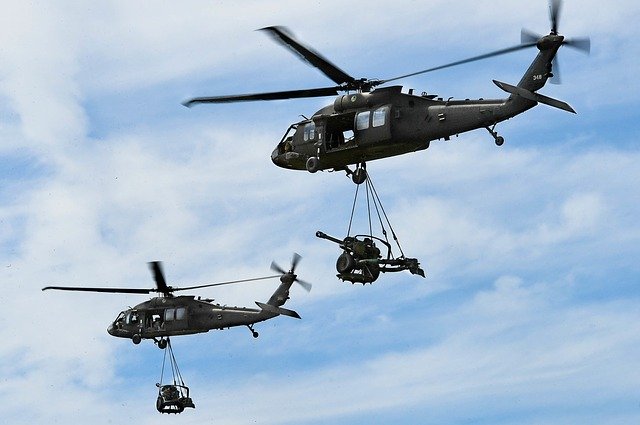 For over 40 years, the Sikorsky UH-60 Black Hawk Helicopter has been used for a variety of applications. First introduced in the late 1970s, this four-blade, twin-engine helicopter is now one of the most widely used helicopters in the world.

Produced by Sikorsky, the Black Hawk helicopter is known for its speed, lift, and safety. Additional key features of the UH-60 include:

The UH-60 Is Suited for a Variety of Tasks

The UH-60 Black Hawk is a durable, versatile, and high-performance helicopter, making it the ideal choice for numerous applications. Some of the tasks that the UH-60 is commonly used for include:

How the UH-60 Is Used in Different Countries

Currently, there are more than 4,000 UH-60 Black Hawk helicopters in operation within more than twenty-five countries around the world. Below are some examples of how different countries utilize this high-performance, reliable helicopter.

First used in 1979 by the U.S. Army, the UH-60 was designed to replace the Bell UH-1 Iroquois as the Army’s tactical transport helicopter. Since then, there have been a variety of modified versions of the helicopter used by the U.S. Navy, Air Force, and Coast Guard.

Currently, there are over 2,000 Black Hawk helicopters in service in the United States armed forces. While used for a variety of mission types, this helicopter is most commonly utilized for combat assault and search and rescue.

Much like in the United States, UH-60s are used by Mexico’s forces in a variety of applications. In particular, the Mexican Air Force uses Black Hawks to transport special forces units, while the Federal Police commonly uses the helicopters to attack drug traffickers.

In Colombia, UH-60 Helicopters are used by the Colombian Army, Colombian Air Force, and the Colombian National Police. They are typically used for medical evacuation, search and rescue, and to transport troops and supplies to difficult-to-access locations for counter-insurgency operations. In fact, Colombia manages the fourth-largest Black Hawk helicopter fleet in the world.

Similarly, in Brazil, the UH-60 helicopter is used by the Brazilian Army peacekeeping forces, special forces, and search and rescue missions. Additionally, these helicopters are widely used by the country in their armed forces to provide close air support to group forces.

In Australia, the utility helicopter is typically used by the Royal Australian Army to provide support to Special Operations Command. However, Black Hawks have been utilized for all of the following in Australia:

In Slovakia, Black Hawks are operated by the country’s armed forces and are typically used to perform domestic crisis management tasks, such as disaster response and search and rescue.

In Sweden, UH-60s were purchased to expand the country’s existing army and its capabilities. The helicopters are typically used for troop transport, medical evacuation, and logistics support.

In Asia, both Japan and the Republic of Korea are licensed by Sikorsky to produce the multi-mission helicopters in their respective countries. Through domestic production of the helicopter, both of these countries manage very large fleets of Black Hawks.

With two countries licensed to produce Black Hawks in Asia, it’s no surprise that these helicopters are very popular among Asian countries. Additional countries in Asia that utilize Black Hawks include:

Most of these counties use the Black Hawk for assault and evacuation; however, Taiwan once used UH-60s to transport Pope John Paul II and his team around the country in 2000.

For decades, the UH-60 helicopter has been put to use throughout Africa. On the continent, Black Hawks are used for military operations in the following countries:

Additionally, the Black Hawk helicopter has been recently utilized for commercial use in South Africa. While most commonly used for firefighting and disaster relief, a Black Hawk was once used to lift and rescue a rhino in Mpumalanga, South Africa.

No matter what application a UH-60 is used for, frequent maintenance and repair is crucial to keep your Black Hawk helicopter running safely and smoothly.

At Cutting Dynamics, we have been providing vital products and services to the aerospace industry for over thirty years. In particular, we offer reliable replacement parts and maintenance kits for UH-60 helicopters.

Our UH-60 Black Hawk phase maintenance kits make it easy to keep up with helicopter maintenance and repair. We offer fully equipped phase kits for the following flight hour intervals:

In each kit, you will receive color-coordinated, Sikorsky-approved parts that make performing maintenance a breeze.

In addition to maintenance kits, we also offer Black Hawk replacement parts. We offer spare parts for the following zones of the helicopter:

As a leading provider for the aerospace industry, our replacement Sikorsky parts have been utilized in commercial and defense aviation sectors around the world. Some of our clients have included Boeing, Parker, Sikorsky, Spirit AeroSystems, Cessna, Gulfstream, and Bell.

Founded in 1985, Cutting Dynamics is a leading provider of essential products and services for the aerospace industry. In addition to UH-60 replacement parts and maintenance kits, we also offer the following services:

If you are in need of replacement Sikorsky parts or Black Hawk maintenance kits, contact Cutting Dynamics today. Our team of experts is ready to answer any questions you may have.