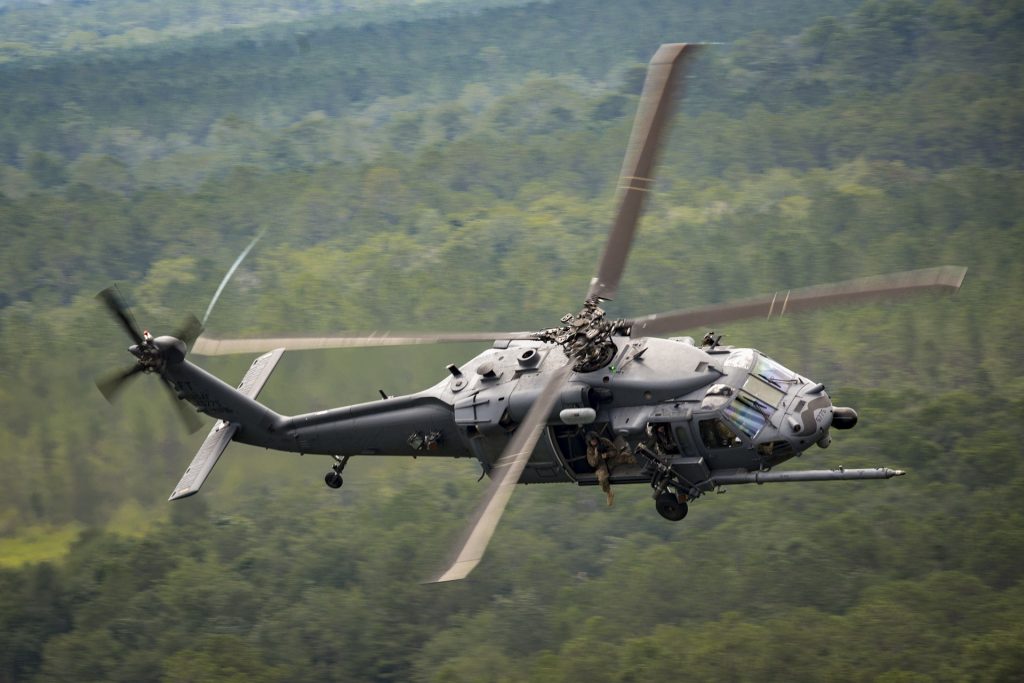 The HH-60G PAVE Hawk helicopter is a twin-turboshaft engine helicopter used by the United States Air Force primarily for the recovery of personnel under hostile conditions. Keep reading to learn more about the helicopter, its features, famous missions, and much more.

Design and Development of the HH-60G

In the early 1980s, the U.S. Air Force replaced their aging HH-3E Jolly Green Giant helicopters with UH-60A Black Hawks. Over time, the Air Force began upgrading each of the UH-60As with an air refueling probe and additional fuel tanks in the cabin. They also swapped out the 7.62 mm M60 machine guns for .50 caliber XM218s. This new model of helicopter was then referred to as “Credible Hawk” and entered service in 1987.

Key Features of the HH-60 Helicopter

Additional key features of this model include:

Additionally, various enhancements and add-ons are available depending on the helicopter’s mission.

While the primary mission of the HH-60G helicopter is recovery of personnel from hostile regions, this medium-lift helicopter can be used in various other applications. Some additional missions that HH-60G’s are used for include:

Renowned Missions of the Sikorsky HH-60G

Since its introduction, the HH-60G PAVE Hawk has been used in several well-known operations and has been instrumental in saving lives during natural disasters and major floods. Some of the missions that have benefited from the capabilities of an HH-60G include:

Well-Known Variations of the HH-60G

During its decades of operation, the HH-60G has been made available in various iterations, some of which are no longer in operation. Some of the key variations and their specific functionalities include:

How to Keep Your Sikorsky Helicopter Operating Safely

No matter what variation of an HH-60G you deploy, it’s crucial to perform regular maintenance to keep your helicopter running safely and smoothly. At Cutting Dynamics, we offer Sikorsky helicopter phase maintenance kits for the following flight hour intervals:

Each of the phase kits contains Sikorsky-approved replacement parts. These parts are organized into five different sections according to our patented color-coded system, making it easy to perform maintenance on your helicopter.

In addition to our maintenance kits, we also offer replacement parts for Sikorsky helicopters. We provide reliable, cost-efficient, and high-quality parts for the following zones of your helicopter:

If you use HH-60Gs or any other Sikorsky helicopters and need replacement parts or maintenance kits, contact the team at Cutting Dynamics today. Our team is ready to answer any questions you may have